You are here:
Sports

First, let me say this is not a whining sore loser post. Louisville lost the game, and it’s over and done. They didn’t bring their A-game, and many mistakes were made. If they had taken care of business the way they were capable of, they would have never been in this close game situation. I’m not saying Louisville deserved to win or that Kentucky deserved to lose, I am just saying let the kids determine the outcome of the game with their play and not a bad call.

The play that changed the game winner from Louisville to Kentucky came with less than two minutes to play. The score was tied, Louisville was on the 10-yard line. Then this happened.

The first point is that Lamar clearly twisted the ball so that his wrist hit the ground first as he fell. Lamar Jackson is the front-runner for the Heisman trophy and knows the rules very well. The rules state that the ground can NOT cause a fumble while he is being tackled. He also knows once the wrist touches the ground he is considered down according to the rules of the game.

Cyber Monday up to 50% off all Cards Gear at Fanatics.com

Bullhorn has been a writer at Inside Louisville for the last 11 years.

Katina Powell Speaks Out On News Of No Indictment
May 26, 2017

Lamar Jackson moves Louisville into the top 10 in both polls
September 12, 2016

Getting To Rick Pitino Was The Goal For Katina Powell
February 10, 2016
Derby City Limousines 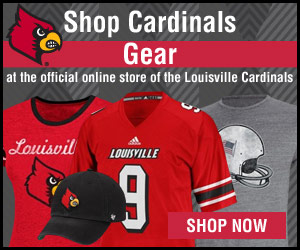